On October 18, 1944, the internment of the German and Hungarian population began. According to official statistics, some 140,000 Germans and several thousands of Hungarians worked in the 41 labor camps operating in Vojvodina until 1948. Interestingly (though it probably came as no surprise to Hungarians) Tito’s Yugoslavia also had its own internment and labor camps, especially prominent during the period when it had broken ties with Moscow – the year of 1948 was rife with internment, imprisonment and concentration camps. Persons who were deemed enemies of the established system, including, among others, “clerics, Chetnics, Ustashas, liberals, nationalists and anarchists” were interned to prisons and the two camps at Goli Otok, at Kvarner bay, in the vicinity of Senj and the camps of Bileca, Uglajn and Sveti Grgur. Communists were also added to the group of enemies from 1949, when Ministry of the Interior Aleksander Ranković ordered UDBA (the Yugoslavian Secret Service) at Tito’s command to arrest those who had reached the age of being able to bear arms whether they are communists or not, and whoever gave even the slightest cause for suspicion if there should be open conflict with the Soviet Union. Between 1948 and 1954, the Secret Services had arrested thousands of party members indiscriminately. Whoever showed even the slightest objection or did not support Tito to a sufficient degree no matter how dedicated they were to their country or to the Communist Party were sent to internment camps without a second thought. Of these camps, Sveti Grgur was a completely demolished former Italian war prisoner camp that the interned prisoners were forced to rebuild from scratch. Over time, approximately 200-250,000 people had been imprisoned and some 40-60,000 people were interned to prison camps by so-called disciplinary committees established for this very purpose or imprisoned after they were sentenced in show trials at court. The camps of Goli Otok were opened in 1949 and had received approximately 31-32,000 people, with 5,000 to 20,000 people dying at the camp site. The majority of camps were established in the Western parts of the country: Ram in Serbia, Stara Gradiska and Bileca in Bosnia Herzegovina, Sveti Grgur, Ugljan Rab and Goli Otok in Croatia, and it was generally accepted at every camp that in the majority of cases, the imprisonment of interned persons was for an indefinite period. Interrogation of the prisoners continued in the camps as did torture and beatings. The last “Stalinist” was freed from Goli Otok in 1956, after which the Croatians held all “nationalist” political prisoners until 1963 when the complex was finally abolished completely. 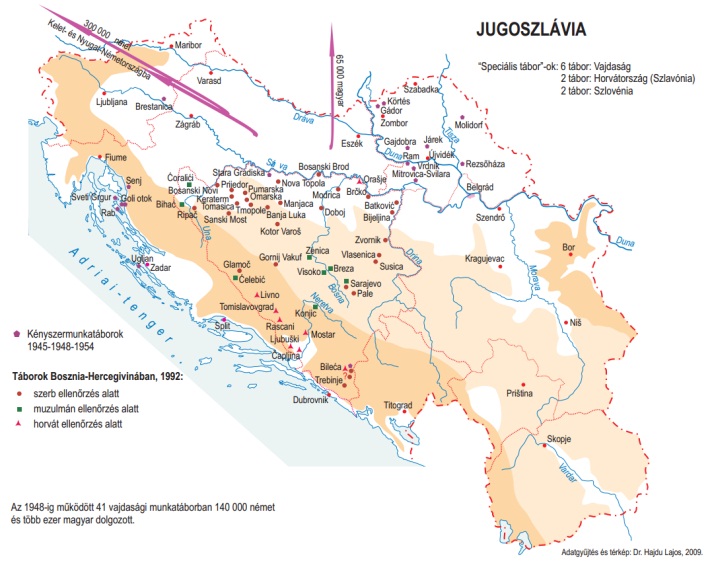