Several interment and labor camps had been established on Czech and Slovakian territory, all of which fell into three different categories: 1) war prisoner camps, 2) forced labor camps and 3) correctional boot camps. After 1945, internment affected two large groups of inhabitants in Czechoslovakia: one was the group of Sudeten Germans as an ethnic community, and the other comprised of so-called “capitalist collaborators” and those who were considered as such by the Czechoslovakian government and its law enforcement organizations, including antifascists and “reactionists”. The two categories only differed in terms of their proportions as these measures affected some 3 million Sudeten Germans while “capitalist collaborators” amounted to a mere few thousand people. These acts of ethnic cleansing and retribution had no legal ground, but their implementation was well planned and organized, and executed by order of local committees. The majority of these local “national committees” were in the hands of communists, which in a way foreshadowed the “Czech coup” of February 1948. Following World War 2, the first camps were populated by Sudeten Germans.

Before deportation, Sudeten Germans and Slovakian Hungarians were gathered in camps. Sudeten Germans were charged with collective treason and collaboration, but both categories of “enemies” faced the same countermeasures including confiscation of their assets and internment. Even the non-communist Minister of the Interior stated that “all dangerous German individuals must be interned and gathered in concentration camps so that we may take full advantage of their labor force.” These mass internments and the work of national committees were executed and assisted by militias called “revolutionary corps”, and their orders were basically to reach full productivity in the former German labor camps and any barracks established during the occupation of Czechoslovakia. There were approximately 600 such camps in the country, the most important ones in the district of Prague, but camps were also established in Moravia and Silesia.

In the first period of 1945-1947, one of the worst concentration camps was the Strahov stadium in the district of Prague – Concentration Camp no. 10 – where up to 5-8,000 people were held by prison guards, most of whom were ordinary criminals. These camps were heterogeneous, which means that children, women and men were imprisoned together. From the summer of 1945, the administration and organization of these camps improved and labor camps became official subsidiaries to concentration camps.

In April 1946, there were some 80,000 registered interned persons in Czechoslovakia. However, these camps were reorganized in 1947, which means that smaller camps were closed down and their inhabitants redistributed, leaving approximately 200 camps in Czechoslovakia. On average, inhabitants of these labor camps were between the ages of 15 and 50; children and women were forced into agricultural labor, while “heavy-duty” work was done by male prisoners. (There were also camps where the youngest worker was 10 years old.) Since this labor force was still insufficient, these prisoners were gathered in transit camps (concentration camps, temporary camps) and then sent back to the labor camps. There were so many prisoners by this time that neither the prisons nor the camps could hold their numbers. In the barracks, interned prisoners slept on hay scattered on the floor, or on straw mattresses if they were fortunate. They had no blankets and ventilation in the barracks was poor since they were forbidden to open the windows. Interned prisoners had no water, hygiene products or disinfectant, leaving camps infested with insects and parasites. Latrines were also scarce; for example, at the Baar Corporation in Suchodole nad Odru, only 4 latrines were available to some 1,700 prisoners, most of them women and children. However, several changes occurred in the last quarter of 1945, since the deportation of the German population came to a halt during fall of 1945 and the centralization of concentration camp administration was abandoned. From that time, the management of camps was relegated to district authorities rather than the local national committees and were officially “maintained” for those who had been “stripped of their Czech citizenship”. There were also changes regarding the composition of guards at the camps as camp security became the responsibility of the State Security Authority instead of ordinary criminals, partisans and voluntary guardsmen.

On February 25, 1948, the infamous Act 231/1948 on the protection of the People’s Democratic Republic had entered into force, thereby legalizing forced labor camps on the grounds that they were established for “counterrevolutionaries” who had threatened the people’s democracy and the establishment of a democratic state system (according to the Act entered into law on October 25 of 1948). Even the smallest offense was subject to this Act. Committees holding the right to internment consisted of three members appointed by the national soviets of the districts. Their sessions were private and could only be attended by members of the Ministry of the Interior or the State Security Authority. There were a total of 19 committees on Czechoslovakian territory.

On October 25, 1948, Act 247/48 entered into force and established the system of forced labor camps called the TNP system (Tábory nucené práce, ‘forced labor camp’). In 1949, there were approximately 13,400 persons interned in Czechoslovakian camps for political reasons, and their numbers increased to 25,000 by 1950. In Ostrava, for instance, people could be interned even for minor offenses against work morale. In 1951, new reforms were implemented regarding the administration of the camps, which relegated these camps to the Ministry of Justice and preserved the larger camps and their adjoining smaller camps, including the camp at Ostrava. Interned prisoners of political camps under the management of the Ministry of Justice were marked by the letters TNP. Between 1949 and 1951, there were 5 forced labor camps in the districts of Jáchymov and Pribram. The number of camps increased to 18 between 1951 and 1954, but had been recategorized as correctional boot camps in the districts of Jáchymov, Horni Slavkov and Pribram, all of them established around the uranium mines in the area, including Pribram and Slavkov. The “inhabitants” of these camps were called “mukl” (muž určeny k likvidaci, ‘men marked for liquidation’), which designated interned prisoners who had been detained for over 10 years. These prisoners worked at the radioactive mines of Voina 1 and Voina 2. (Voina was the only camp that remained, extracting uranium from stone for the Soviet atom industry.) There was a strictly confidential plan marked code T 43, which would have involved a “class cleansing” operation to be executed within one year. This plan formed part of the Czechoslovakian Communist Party leadership’s projects following their rise to power, where the objective would have been cleansing the cities of “suspicious reactionary elements”. This plan was executed on October 3, 1949 in Prague, as a result of which 778 persons were interned to different camps. By the end of 1950, there were approximately 350 camps and prisons in Czechoslovakia containing some 120,000 interned persons and prisoners. Although TPN camps were abolished in 1954, they were maintained for a few more years; the only difference was that these institutions were no longer called “camps”. The last camp was closed in 1956, but the institution of camps was only completely abolished in 1961.

To enlarge the map use the mouse pointer. 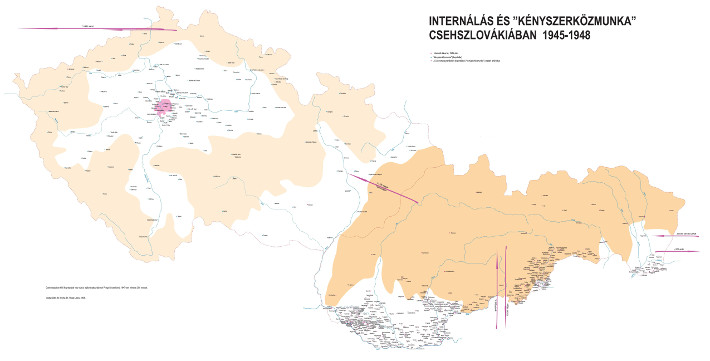