“At first we are going to destroy you physically then psychologically and finally we are going to hang you. In this country we do as we wish.”
(An operative officer in the Kazincbarcika camp)

The camp was opened on 6th October, 1951. The majority of inmates were former prisoners of war (army and gendarmerie officers who had been to Soviet prison camps. Some ethnic minorities, mainly Germans, who had no place to be sent to in the area of contemporary Hungary, because their families had been interned, were also gathered here. Prisoners in Kazincbarcika built the Borsod Chemical Works. The number of people in the camp was about 1,200-1,300.

Not only construction sites in Kazincbarcika but all the places of work shown on the map belonged to a central management, which was called KÖMI, the Hungarian abbreviation for Management of Work of Public Concern. The number of prisoners employed by KÖMI in the spring of 1951 was 17,614. 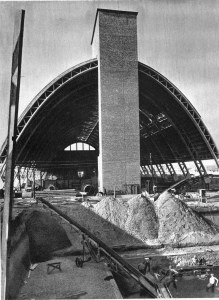 Salt repository built by prisoners in Kazincbarcika, 1952 – Photo taken from the Fertilizer Factory